Skip to content
Tommie Lee Suber history, Law, Left Politics, Trump October 23, 2018 8 Minutes
Powell’s proposal — a corporate takeover of US politics to carve off a bigger piece of the pie — was just the remedy for their ongoing crisis of profitability. Corporate America was all in. 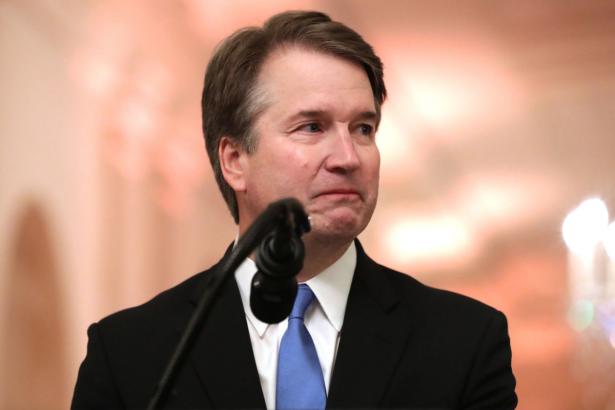 In the 1970s, a revolution began. It was a deliberately hidden revolution, concealed so well that it is unknown to most Americans, even though it has profoundly and forever changed the nation. This ongoing revolution has brought us a Grand Canyon of inequality, Donald Trump — and now, Brett Kavanaugh. To understand what happened, we must go to the beginning.

It was 1971, and US corporations had a problem. The economies of Europe and Asia, previously devastated by WWII, had recovered and were knocking on our door with their cars, consumer electronics, appliances and other goods. US corporate profits fell like wet laundry.

Not only were US companies under pressure from abroad — they were also under pressure domestically. According to corporate attorney Lewis Powell, the politics of the ’60s had emboldened “Communists, New Leftists and other revolutionaries,” who were now joined by “the college campus, the pulpit, the media … the arts and sciences, and … politicians” in critiquing corporate power. US business, accustomed to doing well without having to do much political work, seemed to have neither the stomach nor the muscle to fight back.

Powell was angry. In a memo, he called for a counterattack, a massive marshaling of business’ fearsome resources to fight back on campuses, in the media, in books, political advertising, lobbying, campaign spending and finally, in Powell’s own bailiwick, “the neglected opportunity of the courts.”

Powell’s proposal — a corporate takeover of US politics to carve off a bigger piece of the pie — was just the remedy for their ongoing crisis of profitability. Corporate America was all in. Indeed, raising money to buy a pro-corporate legal system was like “knocking Coke bottles over with a baseball bat,” as one fundraiser put it.

In particular, a group of individual billionaires — scions of corporate family dynasties — took the lead: Joseph Coors (beer), John Olin (munitions and chemicals), Richard Mellon Scaife (banking), the Smith-Richardsons (pharmaceuticals) and the Kochs (oil and natural gas) provided the crucial money. Their funds were then often matched by corporate contributions.

The pillars of this corporate offensive soon began flying off the line like cars at a Ford plant. Almost overnight, it seemed, there were new conservative think tanks, journals, book publishers, media outlets, Political Action Committees (PACs) and Super PACs, lobbyists, consultants, and on and on in a dizzying array of tactics for Corporate America to win its political fights.

The legal arena was no exception. The conservative weapons forged to fight for control of the law included:

Not surprisingly, in this right-wing hothouse, conservatism became more conservative. Corporations used to win Supreme Court victories about 50 percent of the time, even under conservative courts. Today, they win 75 percent of the time. In those cases where the “Roberts Five” Republican-appointed justices vote together against the four Democratic-appointed justices, they have supported corporate or Republican positions 92 percent of the time — allowing dark (anonymous) money to influence elections, decimating unions, preventing gun regulation, suppressing voters, allowing gerrymandering, blocking workers and consumers from court protection against corporations, permitting pollution and undermining abortion rights. Today’s Supreme Court is the most conservative in living memory.

A new generation of conservative jurists now fervently flogs a legal theory that is too far-right even for the last generation of conservatives like Scalia and Alito. The court decisions that struck down child labor, minimum wage and workplace safety laws have long been considered part of the “anti-canon” – decisions so discredited as to dwell with Plessy and Dred Scott in the Court’s basement of shame. But in the writings of Appellate Court conservatives trying to catch the eye of the Federalist Society (see Neil Gorsuch), the doctrine of corporate “anything goes” is back.

Kavanaugh and the Billionaires’ Legal System

The power of this conservative legal system over judicial appointments became clear when George W. Bush nominated White House Counsel Harriet Miers to the Supreme Court. She turned out to have two fatal flaws: She was not a member of the Federalist Society, and she hadn’t produced a body of writing that would show her to be a bona fide conservative. A firestorm of angry conservative blowback torched her nomination.

Justice Kavanaugh had no such problem. He is not just a member of the Federalist Society; he is a leading light who has given more than 50 speeches to the group. The fact that he was on the Society’s list of eligible candidates means that he will fit the “Roberts Five” like a machine-tooled cog.

In 2-1 decisions on the DC Circuit Court, Justice Kavanaugh supported a corporate or Republican position 91 percent of the time. Like the “Roberts Five,” Justice Kavanaugh supported dark money, union busting, voter suppression, corporate pollution, guns and abortion restrictions. He is significantly more conservative than the Republican-appointed justice he is replacing. With his confirmation, the billionaires’ takeover of the courts has reached a new zenith.

There is a liberal counterpart to this conservative legal system, but it’s a little David up against a big Goliath. Take, for example, the liberal version of the Federalist Society, the American Constitution Society. Its budget is $6 million. That’s what the Federalist Society’s budget was 20 years ago. Today, the Federalists have a budget of more than $20 million.

A new addition to the billionaires’ stable, the Judicial Crisis Network by itself spent more than $12 million on advertising and lobbying to boost Justice Kavanaugh’s nomination. A spokesman for the liberal Alliance for Justice, an advocacy group which monitors federal judicial appointments, could only hope, in vain, that “this fight can be won without the millions of dollars amassed by the right, by big business.”

The reason liberals lag behind is simple: They do have billionaires in their corner, but not as many as the conservatives have. Only recently have researchers been able to report on the political attitudes of the richest Americans, and their findings are a revelation: It turns out that F. Scott Fitzgerald was right when he said, “The rich are different from you and me.” They are much more politically active than the average American, and much, much more conservative.

This finding explains why liberals and Democrats lag behind in financing almost everything, including election campaigns. Princeton political scientist Larry Bartels reports that, in an analysis of 14 elections, every Republican presidential candidate outspent his Democratic opponent, giving the GOP an average vote boost of 3.5 percentage points – often, the margin of victory.

The stunning success of the billionaires’ revolution has given rise to a formidable political machine and huge policy wins for corporations. Justice Kavanaugh’s ascension to the Supreme Court is an important moment in the revolution of the rich. The right-wing corporate movement has wrought a Supreme Court that Lewis Powell and US billionaires could love. Ironically, it is a former Supreme Court justice who has captured the moral of our story: “We must make our choice,” Louis Brandeis said. “We may have democracy, or we may have wealth concentrated in the hands of a few, but we cannot have both.”

Calvin F. Exoo is a political science Ph.D. (Wisconsin-Madison) and an endowed professor of government at St. Lawrence University in Canton, New York. Exoo has published three books on US politics; the most recent, The Pen and the Sword: Press, War and Terror in the 21st Century, was named an “Outstanding Academic Book for 2010 by Choice” by the reviewing service of the American Library Association. Since 2010, Exoo has been writing for online magazines, including Salon, HuffPost, Daily Kos and Truthout.

Am American radical union organizer, public employee, and peace activist. See BioPage.com for more details of Tommie Suber's life. In addition, you will find reprinted articles for purposes of criticism, comment, news reporting, and always with education and teaching the foremost role of this nonprofit blog View all posts by Tommie Lee Suber